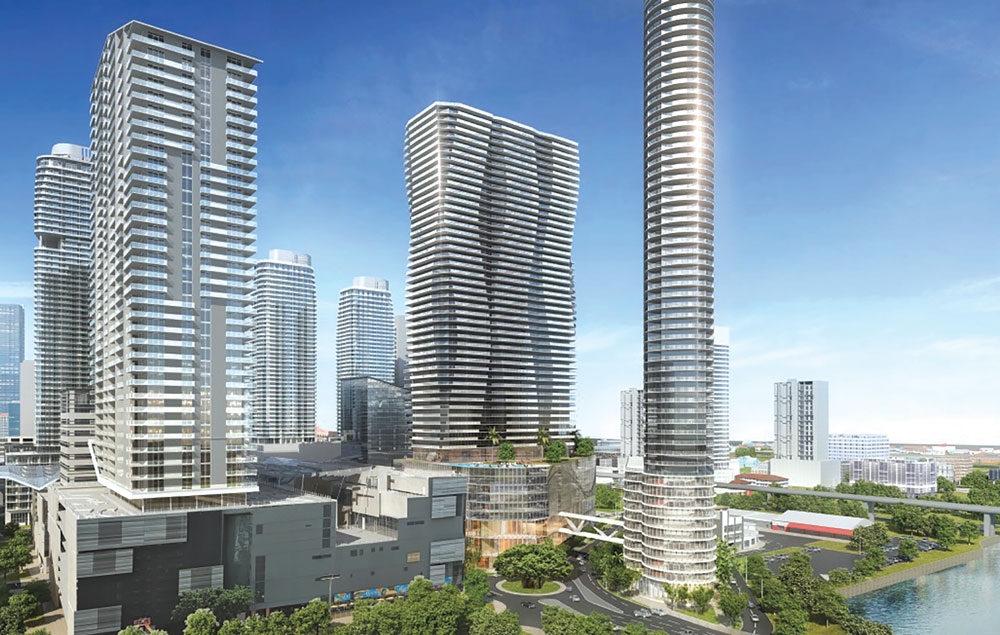 As Brickell City Centre prepares to grow again in the next couple of years, the next phase of construction will include a fire station and a public riverwalk.

The fire-rescue station and the riverwalk are promised by developer Swire Properties Inc. and its affiliates, and are detailed in a new development agreement approved Jan. 24 by the Miami City Commission.

Those additions are listed in the new development agreement under the “public benefits” section, which also includes a promised contribution of $1 million to the city for its Anti-Poverty Initiative or placed into the city’s Affordable Housing Trust Fund.

At their January meeting, commissioners approved a third amendment to the project’s Special Area Plan (SAP) and a second development agreement.

Brickell City Centre is a project on multiple city blocks south of the Miami River, along South Miami Avenue, between Eighth and Fifth streets.

As part of the city’s Miami 21 zoning code, the public benefits program allows bonus building capacity in exchange for a developer’s contribution to programs that benefit the public, including affordable housing, parks and recreation, civil and civic support and more.

The third amendment to the previously approved SAP adds 2.39 acres for a total of 13.96.

The new plan calls for two residential towers, one at each site.

The first tower, to rise at 650 S Miami Ave., would have 54 stories containing 588 residences; the second tower would rise to 62 stories and have 384 residences.

The towers are to connect by pedestrian bridges to the existing Brickell City Centre, and Swire plans an extended paseo, or walkway, along South Miami Avenue from Southeast Fifth through Seventh streets.

The riverfront will also be revitalized as part of the pedestrian trail, with the purchase of remnant land that the Florida Department of Transportation was using for storage, according to a Swire representative.

Although not technically part of the Miami River Greenway, these improvements south of Fifth Street will coordinate directly with the growing Greenway-Riverwalk, and open up pedestrian connections to the river from Brickell City Centre and South Miami Avenue that don’t now exist.

Once this phase begins, it is expected to require three years to complete, according to Swire.

The new fire-rescue station is to be built by the private developer on its property between Southeast Fifth and Sixth streets, and near the river.

The new development agreement calls for “Construction of a temporary and then a permanent fire station for the city,” with the following details.

The temporary fire station will consist of, at a minimum:

■A protective awning of approximately 40 by 20 feet (with 11-feet clearance) to protect fire-rescue apparatus.

■A motorized gate and fencing.

■Appropriate furniture for the trailer.

All temporary fire station improvements are to meet the technical and logistical requirements of the Department of Fire-Rescue.

The permanent fire station is to be 6,500 square feet.

City officials and Swire representatives first began negotiations on the fire station in 2015.