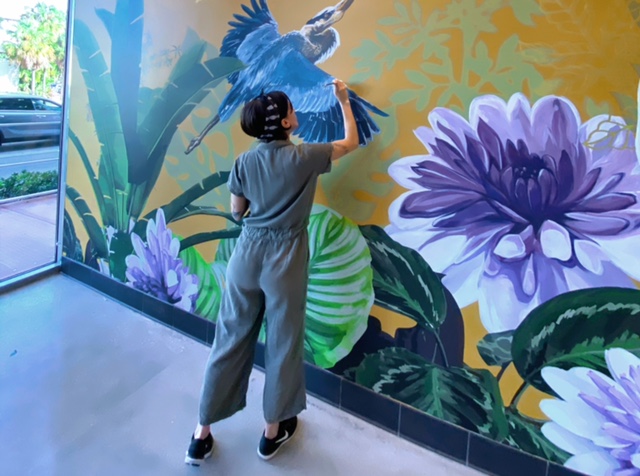 Contracts and planning details are being finalized for the installation of four art murals along Miracle Mile in Coral Gables.
The fall economic development programming, which is aiming to debut mid-to-late November, is promised to bring a whole new pedestrian experience for visitors and residents.
The city’s Economic Development Department is working with the Coral Gables Business Improvement District and Chalk & Brush Design Co. to create floral-centric art murals. The welcoming art pieces are the next set of public space installations similar to the city’s widely publicized umbrellas installation on Giralda Plaza, which opened in July 2018, drawing thousands of onlookers and diners.
“We want to create something to generate interest and highlight the character of our city,” said Francesca Valdes, the city’s business development coordinator. “We also want to provide a program where people who are passing by want to stop and take photos and possibly stay for lunch or dinner. It’s more of a hometown project that will bring visitors and residents back to our downtown.”
The first mural wall will be at Miracle Mile and Salzedo Street and be called “Smile, You’re on Coral Gables.” The second mural titled “Life is Sweeter in the Gables” will be at the intersection with Ponce de Leon Boulevard. The third will be near Seasy Mediterranean restaurant at 136 Miracle Mile entitled “Greetings from the Gables.” The fourth will be installed at the McBride Plaza section at 150 Miracle Mile called “Galleria De Gables,” which will be composed of four smaller murals.
The art murals are being inspired by similar installations in other cities from across the country, like downtown Nashville’s famous angel wings and Key West’s southernmost point landmark.
Mural dimensions differ depending on the size of the walls, Ms. Valdes said. “They range from 368 to 1,000 square feet. They are going to be big enough to pose with and will fit in your pictures.”
The introduction of these murals to the city will help activate the fall season, said Aura Reinhardt, executive director of the Coral Gables Business Improvement District, which contributed $25,000 toward the art installation project. “We have to find ways on how we can tap everybody into these art form experiences.”