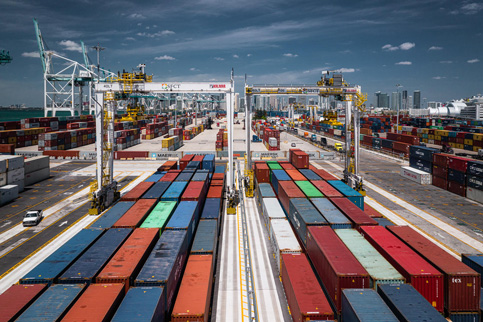 PortMiami just posted the biggest import-export numbers in its 80-plus-year history, new Miami-Dade County figures show, exceeding its prior record by 1.5% despite the difficulties that come with operating under coronavirus conditions.

The port processed 107,088 twenty-foot equivalent units of cargo in October compared to 105,573 in 2019, an accomplishment staff attribute to “a solid balance of global trade and more than $1 billion of completed capital infrastructure improvements,” a PortMiami press note said.

The announcement was foreshadowed. During a “State of the Ports” video conference earlier this month, PortMiami Director Juan Kuryla told Aviation Director Lester Sola, World Trade Center Miami Chairman Roberto Muñoz and Bill Johnson, a former PortMiami director and Florida secretary of commerce, that while the port had a decent August and September was “good also,” he couldn’t wait to release the numbers for October.

“That is a significant achievement considering the economic conditions worldwide, considering some countries have not yet totally opened, and kudos again to our incredible cargo development team,” he said.

In a statement, Mayor Daniella Levine Cava said highlighted PortMiami’s position as a “major global hub for trade and commerce” that consistently creates jobs and other opportunities for the local community.

“As we look to rebuild a stronger, more resilient economy, the seaport is critical to our long-term sustainable growth and prosperity,” she said.

Past dredging projects have significantly increased the harbor’s capacity, enabling it to handle the biggest cargo and cruise vessels to call on a Florida port. As of this month, the port has welcomed more than 400 post-Panamax vessels – ships unable to pass through the Panama Canal due to their size – thanks to the completion of the county’s “deep dredge” project and purchase of super post-Panamax cranes.

County commissioners have OK’d an additional three-year study of further dredging of the harbor by the US Army Corps of Engineers. The port’s last dredging, which concluded in 2015, coincided with severe coral die-off in the area.

The Corps blamed coral disease for the death of some 560,000 corals, including 80% of all small coral within 500 meters of the channel – figures from a study in the August 2019 edition of the Marine Pollution Bulletin said. Local environmental groups disagreed.

“Disease does not cause coral to be buried under sediment,” Miami Waterkeeper Executive Director Rachel Silverstein, a co-author of the study, said during a November 2018 public meeting the Corps hosted to discuss a study of future dredging set to conclude in September 2021.

Known as the “Cruise Capital of the World” and the “Cargo Gateway of the Americas,” PortMiami is Miami-Dade’s second-largest economic engine, generating about $43 billion to the local economy yearly and supporting more than 334,000 South Florida jobs.

“PortMiami continues to make its impact on South Florida’s economy despite the worldwide challenges that we are all experiencing,” said acting Miami-Dade Commission Chairwoman Rebeca Sosa, who leads the Tourism and Ports Committee. “Such performance is a reflection of the resilience of our community and the role played by PortMiami.”