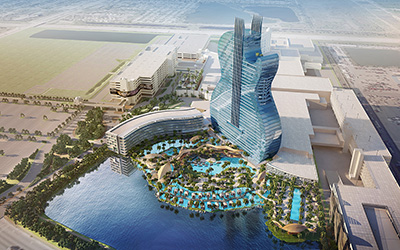 The guitar-shaped hotel in Hollywood, Florida, is set to open Oct. 24. Illustration: Seminole Tribe of Florida

A skyline-defining hotel shaped in the form of back-to-back guitars is scheduled to open this fall northwest of Miami as the centerpiece of a $1.5 billion expansion designed to try to make the Seminole Hard Rock Hotel & Casino an international gaming destination.

The hotel, designed by Klai Juba Wald of Las Vegas, is set to debut Oct. 24 in Hollywood, Florida, featuring guitar faces, necks and strings that extend 450 feet into the air. Seminole Tribe of Florida executives say the 638-room landmark hotel is unlike any other in the world.

The Seminole Tribe also announced that a $750 million expansion of the Seminole Hard Rock Hotel & Casino in Tampa, Florida, will be completed by Oct. 3. That project will expand the existing hotel and bring additional retail, restaurants and entertainment to the site.

But the Hollywood property is the flagship destination for the Hard Rock International operations owned by the Seminole Tribe of Florida. It is 10 miles north of Hard Rock Stadium in Miami Gardens, home of the Miami Dolphins pro football team and where the Super Bowl is to be played in February 2020.

The guitar hotel, hard to miss from flights landing at Fort Lauderdale-Hollywood International Airport, is generating plenty of buzz. At least one batch of marketing materials has compared the hotel to the Washington Monument, which is 555 feet high, and the Eiffel Tower, which is around 1,000 feet high. Meanwhile, officials are promoting the hotel entrance’s “oculus,” a free show every 30 to 40 minutes that will include light, sound, water and music.

Jim Allen, chief executive of Hard Rock International, recalled during a media briefing that the idea for a guitar-shaped hotel started in 2007 out of a conversation he was having with an architect about the feasibility of building a distinctive property to enhance the brand of the rock ‘n’ roll-themed entertainment complex. Plans ultimately were slowed by the Great Recession, he said.

Allen noted that the existing hotel on site regularly achieves occupancy of 96%, prompting the need for more rooms. A third hotel featuring 168 rooms also is part of the expansion.

“This gives us the ability to market and bring in more people,” he said. “It’s easy to build it. Now we have to fill it and run it.”

Casinos tend to attract a large local business, but the Seminole Tribe expects the guitar hotel to draw more out-of-state and international visitors.

“There isn’t anything in Vegas like this,” spokesman Gary Bitner said. “If you want to do the neatest thing, the coolest thing, you’re going to come here to do it.”

The Seminole Tribe will begin taking room reservations July 24. Rooms will range from 515 to 4,000 square feet, though rates have not yet been set. The Maroon 5 band is booked to perform the grand opening show on Oct. 25.

When completed, the expansion is expected to bring the total number of hotel rooms at the Hollywood site to 1,274. The casino is expected to nearly double in size and feature 3,000 slot machines, more than 225 table games and an 18,000-square-foot poker room.

The project also includes a 41,000-square-foot spa, 141,000 square feet of convention space, a retail promenade and Hard Rock Live, a 6,500-seat entertainment venue. In addition, a 13.5-acre pool complex at the base of the hotel will have private villas, plunge pools and butler service. Building contractors are Perini/Suitt and Suffolk-Yates.

The Seminole Tribe will hold a job fair June 4 to fill 1,200 positions initially, and that number eventually will increase, Bitner said.

Community leaders are touting the number of jobs and tourists the expansion will bring to Hollywood. But others question the long-term impact.

Nick Sortal, a city council member in nearby Plantation, Florida, who attended a briefing, wonders whether the hotel – about a 30-minute drive from the nearest beach – can consistently attract leisure travelers who are not gamblers. Even so, he said he wouldn’t bet against the Seminole Tribe, citing its past success.