Join Us in Miami! Love, Masters of the Universe 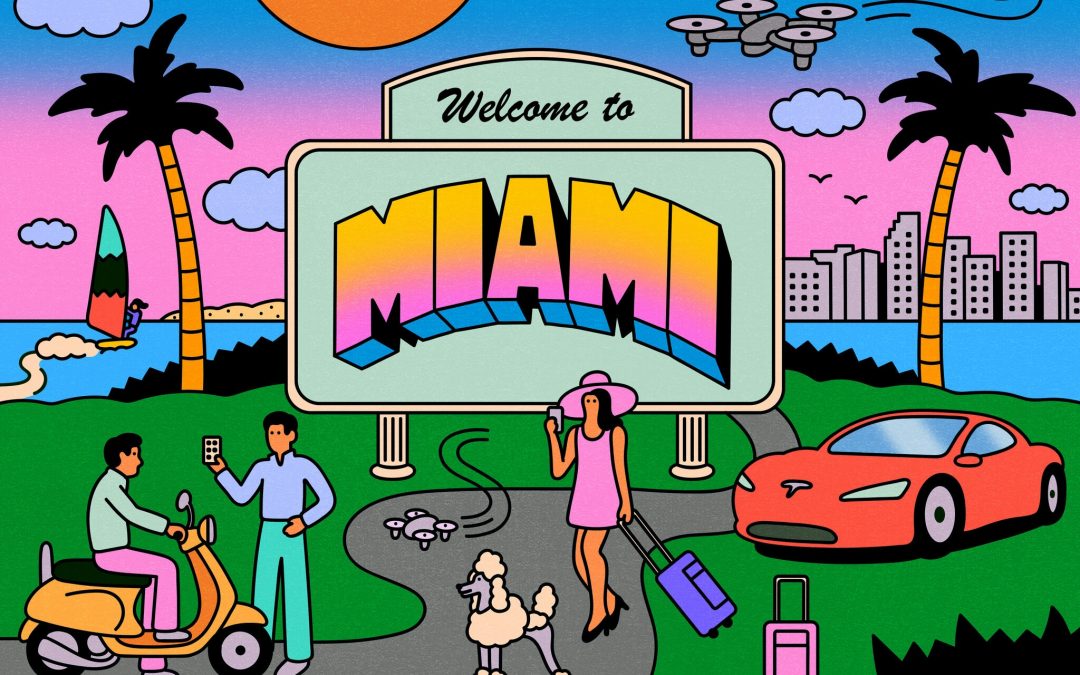 MIAMI — America’s business leaders, freed from the office, looked around the country, taking note of its coronavirus lockdowns, taxes and rabble rousers. And many said as if in unison: Miami!

And the charming mayor, Francis X. Suarez, a registered Republican, knowing he had an especially easy sell at the moment, said: Welcome.

As tech leaders have decamped from San Francisco and Wall Street titans from New York, many have spread across the country to locations with sun, lower taxes and — preferably — more relaxed lockdowns. Coming from places run by progressive governments that were sometimes openly antagonistic toward local elites, many were thrilled to move to towns that seemed to want them more.

Some chose Austin, Texas. Others gravitated to Boulder, Colo. But perhaps the most vocal faction came to Miami

“It was a lightning-in-the-bottle moment,” said Mr. Suarez, 43, who became mayor in 2017. “For them to hear an elected official saying, ‘Hey, we want you, hey, we appreciate you’ — I didn’t realize what a sensitive moment it was in terms of how people felt they were being treated by the governments where they lived.”

Dozens of big names have arrived. There was a tech contingent: Keith Rabois, a PayPal co-founder and investor, and his husband. Then their friend Peter Thiel, the tech investor and prominent conservative. Jon Oringer, founder of the stock-photography provider Shutterstock, and the media mogul Bryan Goldberg. Steven Galanis, the head of the celebrity-video product Cameo, is here. Elon Musk is talking about building car tunnels under Miami.

There are also hedge funds and private equity funds. Paul Singer’s Elliott Management is moving its headquarters to the Miami area, as is Carl Icahn’s firm, Icahn Enterprises. Others are opening major Miami offices: Kenneth Griffin’s Citadel as well as Blackstone. Goldman Sachs is weighing moving parts of its operation to Miami.

Rich people have always moved to Miami to enjoy their wealth and while away their time on the water. It is unclear if these newcomers are just the latest generation to do that, or if they will really build new companies in the city.

But that hasn’t stopped Miami Tech Welcome drinks from happening weekly at an outdoor bistro, where usually 25 or 30 people gather. There are growing WhatsApp and Telegram groups to organize activities among the 300 tech newcomers, with chat rooms on the encrypted messaging app dedicated to dealflow, fintech, healthtech and Miami-specific topics like kitesurfing. Every Saturday, the tech crew goes biking. Tennis is every Thursday. There are big, fancy-dress parties.

“I run the book club and the kitesurfing club,” said Natalia Martinez-Kalinina, who works at Reef Technology, a logistics start-up in Miami. She said this week’s book was “The Price of Everything: A Parable of Possibility and Prosperity.”

She likes the newcomers and socially onboarding them. “My life prior to the pandemic involved a lot of hosting, so this isn’t all that different,” she said.

The new arrivals have manifestoes. It seems no business leader can move to the city without one.

“We recognize the amazing and unique natural gifts that G-d and geology bestowed on California, but enough is enough,” wrote David Blumberg, a venture capitalist who runs Blumberg Capital and moved from San Francisco to Miami in November. “We certainly hope and pray that California will take action to remedy the disastrous self-inflicted political situation and restore its former luster and quality of life, but for now we are voting with our feet.”

Hibiscus Island
Alex Merutka, the founder of Craftsman+, a marketing automation company, was between quarantining in San Francisco and staying on his mom’s sofa in San Diego, soon to be moving to Los Angeles, when he got the call from friends last year about Miami.

“They said come to Miami, there’s something really special happening here,” he said. And so he did.

One recent morning, Mr. Merutka, 29, was having a smoothie by the pool of his new rented house. Nearby, his roommate was in the middle of a boxing session with a personal trainer.

The house is on Hibiscus Island, where Mr. Merutka and his friends from tech and finance have formed a little compound. There are five guys living across the street, one in a guesthouse, and five more in another house down the street. Most are in their early 30s. A group of female compatriots have their own houses.

“You have this thing where everyone’s moving to Miami at the same time, and it’s like we’re all college freshmen again,” Mr. Merutka said. “Everyone who moved down here, they didn’t want to be alone — no one wants to quarantine alone. This let us press the reset button on how we wanted to live.”

The Hibiscus men follow rules to stay Covid-safe. They try to live as one bubble among themselves. No nightclubbing. No indoor working out. They have trainers come instead to coach group fitness classes like boxing and yoga outside.

Mr. Merutka is not coming as a snowbird, in town for the winter. He is declaring residency. He changed his driver’s license and is buying a house. He is taking Spanish classes and just paddle-boarded for the first time.

His start-up is also growing. At the onset of the pandemic, Craftsman+ lost all its travel clients, including Expedia. But the company began focusing its software services on video games. Revenue doubled. Mr. Merutka has gone from 10 employees to 25.

He is buying a house in Miami for his mom as well.

A Pro-Business Mayor
The first thing people in tech asked me was: Have you met the mayor?

“You have a pro-business mayor here, and that makes a big difference,” said Jay Levy, 40, a Miami-born venture capitalist with Zelkova Ventures who moved back to the city from New York during the pandemic.

He said he had started thinking of relocating after a political backlash deterred Amazon from opening an office in Queens in 2019. “That tarnishes business’ view of a city,” Mr. Levy said.

In contrast, he said, it seems almost every investor and founder in Miami has the mayor’s cell number.

Mr. Suarez, the son of former Mayor Xavier Suarez, is a hype machine. The glass door to his office has his mayoral seal and his Twitter handle. No tweet is too random for him to retweet. A Blackstone employee relocating and in need of friends? The mayor reposted her call.

Mr. Suarez, who launched a program called eStart this week to simplify the process of starting a business in his town, credited a combination of the federal cap on state tax deductions, Covid-19, and leftward-moving politics in New York and San Francisco for making the Miami moment happen.

On Thursday, he went live on Twitter with the chief operating officer of SoftBank to announce the Japanese conglomerate had committed $100 million to investing in Miami tech companies or tech companies willing to move to the city.

Mr. Suarez is not above gimmicky stunts.

“Proud to say Miami is the first municipal government to host Satoshi’s White Paper on government site,” he tweeted on Wednesday, referring to the shadowy creator of Bitcoin, the cryptocurrency that has been on a run.

Anyone in tech who flies to Miami can also ask to stay in a special discounted hotel suite with a body-scanning mattress made by a start-up called Eight Sleep. Eight Sleep’s founders also just moved to Miami.

Two Docks
If there is a symbol for the shift in Miami culture, it’s Mr. Oringer’s house.

The house — 20,000 square feet, with two docks (water scooter and yacht) — once belonged to the baseball star Alex Rodriguez. But as of last fall, for $42 million, it belonged to Mr. Oringer, the founder of Shutterstock. He is now figuring out how to remodel the property’s batting cage to be something more useful.

The house has become the co-working space for several of the new companies that Mr. Oringer has invested in through Pareto Holdings, a fund that he and Edward Lando created to invest in Miami start-ups. Its tagline: “Building world-changing companies in the Miami sunshine.”

Pareto has made about 100 investments, with another 100 expected by the end of 2021. The team is focusing on telemedicine, fintech and consumer-relationship management companies.

“Summers are brutal, yeah, but did we forget what winter in New York is like?” Mr. Oringer said over boxed ginger-infused alkaline water by his outdoor kitchen. “I’ll take a Florida summer over a New York winter.

The inflow has been such that the median home sale price in Palm Beach, which is part of Greater Miami, had soared to $4.9 million by the end of 2020, up 29 percent from a year earlier, according to Douglas Elliman, the real estate company. Over the same period, Manhattan co-op and condo prices rose about 5 percent.

Meghan Maloof Berdellans, who runs the executive relocation firm S&S Global, said she was moving two executives from San Francisco or New York to Miami every week. “It’s something we like to call the Mass Techxodus,” she wrote on her blog in December.

Marc Lotenberg, the chief executive of the design magazine Surface, said he had bought a house in Miami and was not going back to New York. He sees his family more. They spend their days outside.

“I’m in the pool, my son in one hand, iPad in the other. That’s how I’m working at 3 p.m.,” he said over salmon salads at the Miami Soho House. “When is that happening in New York? I’m not going back to the traditional office again.”

Coming Home
Unlike San Francisco and New York, Miami is diverse in its politics, with Republicans and Democrats living together in relative peace.

“The universities in Miami graduate more minority engineers than any other city in America,” said Leigh-Ann Buchanan, who is starting Aire Ventures, a nonprofit consultancy to help create diverse tech communities.

Ms. Buchanan said she hoped some of the investment money coming to town went to local entrepreneurs in need, not just new tech founders. It would be a way to spread the wealth.

“Miami has all the material to be something different,” she said. “We’ll see what happens.”

One hot winter day, longtime tech community organizers lounging on fake grass reflected on how frustrating it had been for Miami to have been ignored as a place of innovation for decades. The city was seen as somewhere to retire or to buy a big house and hide out after striking it rich.

I’ve been annoyed about this for years: We have these demographic patterns, we have this talent, but we underutilize our own people,” said Ms. Martinez-Kalinina, 34, who organizes the tech newcomer book club. “San Francisco has a superiority complex, but Miami has an inferiority complex.”

Adam Garfield, 33, founder of SpeedETab, a start-up that provides digital ordering tools to restaurants, said most of the friends he had grown up with in Miami left for jobs in New York or San Francisco and never came back.

“The main option for work here was the tourism industry, so most of my friends left,” he said. “Now they’re starting to come home.”

Chris Adamo, a Pied Piper of the local movement who runs a newsletter-support company, Letterhead, said the newcomers were converting to permanent residents. They might be coming for lower taxes, but he was fine with that.

“This is our Ellis Island moment,” he said. “People can come here, live free and build.”