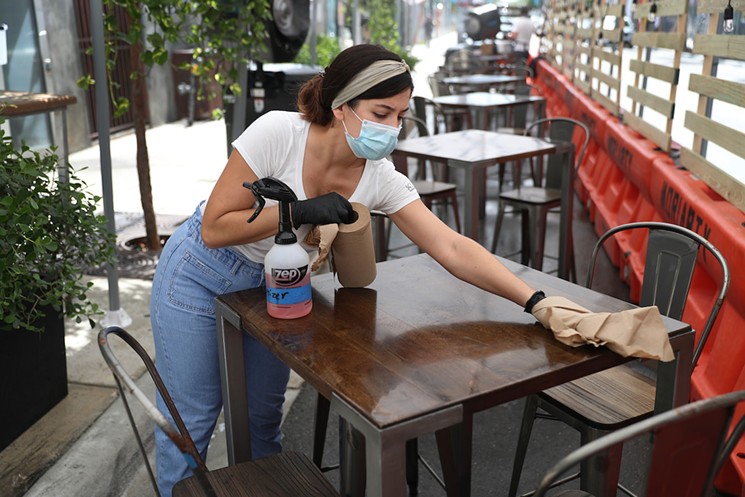 The past few months have proved to be a cruel rollercoaster ride for Miami-area restaurant owners, with government officials ordering restaurant dining closed, then opened, then closed again.

Now, the restaurant industry has some good news.

In a Zoom press conference, Gimenez said he consulted with the White House Coronavirus Task Force and his own team of local medical advisors before giving the green light.

Restaurants will be permitted to reopen for dine-in service with the following restrictions:

Each table must have no more than six guests
Diners must wear a mask while walking into the restaurant and must keep their masks on until water is served. Diners who get up to use the restroom must wear a mask.
Air conditioners must be kept on continuously and not set to automatic. In addition, restaurant windows and doors must remain open to increase the flow of fresh air.
No bar seating allowed.
The mayor noted that the above restrictions aren’t suggestions; they’re orders that are subject to enforcement. Restaurants that don’t comply will be subject to fines and/or closure. The county’s New Normal guidelines remain in effect.

Gimenez continues to recommend that restaurants take advantage of outdoor space for seating diners, noting that a restaurant may exceed 100 percent of its permitted occupancy by utilizing outdoor tables combined with appropriate social distancing.

He said the 10 p.m. curfew in Miami-Dade will remain in effect at least until the Labor Day holiday weekend passes. “The curfew is to curtail socializing,” he said.

Bars are to remain closed for the foreseeable future.

Gimenez said he has no intention of closing beaches over Labor Day weekend — provided people adhere to social-distancing requirements and wear masks.

Unlike Gimenez’s May 14 order to reopen restaurants, which was met with a confusing pushback from city mayors — including those in Miami, Miami Beach, and Coral Gables — who opted to set a reopening date of May 27, Gimenez told New Times that city mayors seem to be on board with an August 31 reopening date.

In an earlier press conference of his own, Hialeah Mayor Carlos Hernandez said the city would no longer enforce the current orders in place — effectively allowing restaurants to reopen immediately. “I am asking my city employees, my departments, that we will not be enforcing in the City of Hialeah the regulations of restaurants being closed, the county can come and do that,” Hernandez declared.

Gimenez said if the City of Hialeah won’t enforce the order, the county will.

“I am very happy that the mayor of Miami-Dade has made this decision. Looking back, the closing of dining rooms was unnecessary and as long as the city and county are enforcing the proper social distancing, we should be able to move forward from this point.”

Vauthy emphasizes that the spike in COVID-19 cases was never directly tied to dining in restaurants, but the industry was scapegoated all the same

“We were, unfortunately, singled out as a culprit when other venues were causing the majority of COVID-19 issues,” Vauthy tells New Times.

Aniece Meinhold is cautiously optimistic about Gimenez’s new order. The co-owner of Phuc Yea tells New Times that, while she’s happy to welcome diners back to her MiMo “Viet-Cajun” restaurant, she fears the uncertainty the next few months have in store. “For me, the most difficult thing has been the constant changes and adjustment to the orders and rules put in place at the local and state levels.”

Meinhold says the past few months have taken their toll on Phuc Yea and its staff. “Your employees want to walk in to work and have some level of consistency. They want to have a stable working environment. I can’t guaranty them stability if all of a sudden we get hit with a closure order again.”

With each reopening order, Meinhold explains, she has to train new people and retrain current staff on new operating procedures. “This situation is extremely challenging to restaurant owners and employees,” she says.