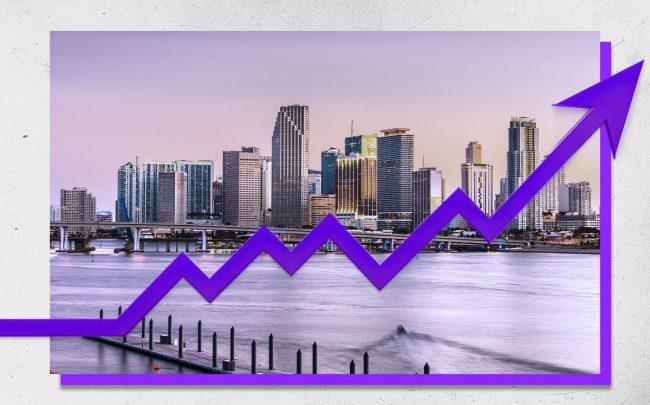 New signed residential contracts and new condo inventory in South Florida rose in July, according to a monthly report from Douglas Elliman. But while the volume of new signed contracts exceeded recent pre-pandemic levels, new listings of single-family homes continued to lag behind levels seen the previous year.

Though new signed contracts have increased in both June and May, overall residential sales in South Florida have dropped during the pandemic, as not all contracts will close.

The largest annual increase in July was for new contracts signed for condos in Palm Beach County, rising nearly 235 percent to 566 new contracts, according to the report. The report is authored by Miller Samuel’s Jonathan Miller, citing data from the Multiple Listing Service.

Inventory of new single-family homes fell in Miami-Dade by 9.3 percent, due to a drop-off in new listings of more affordable houses. Homes listed for under $200,000 declined by more than half to 12 listings in July. At the same time, inventory of homes priced at $1 million-plus grew by 37.5 percent to 198 listings.

Single-family contracts doubled in Broward County, totaling 1,052 in July. Houses priced between $600,000 and $799,000 jumped by more than 164 percent, up to 177 contracts last month. Though all price points experienced year-over-year increases, contracts for homes priced below $200,000 grew by only 15 percent to 38 new contracts, likely due to a lack of inventory. New listings for those homes declined by 50 percent, down to 17 new listings.

Overall, new inventory of single-family homes decreased year over year by 4.5 percent to 1,072. Still, homes priced between $600,000 and $799,000 and homes over $1 million each saw 35 percent annual increases in new listings to about 160 listings each in July.

Single-family home contracts in Palm Beach County increased by 94.6 percent year over year to 1,052 contracts, with the growth concentrated among the middle- to higher-end homes. Signed contracts for homes priced at $400,000-plus more than doubled year over year, totaling 301 contracts in July.

Condo contracts surged in Palm Beach County, growing a whopping 235 percent to 566 new contracts signed in July. Units priced under $200,000 made up almost half of those contracts countywide in July. Every price range saw triple-digit growth.