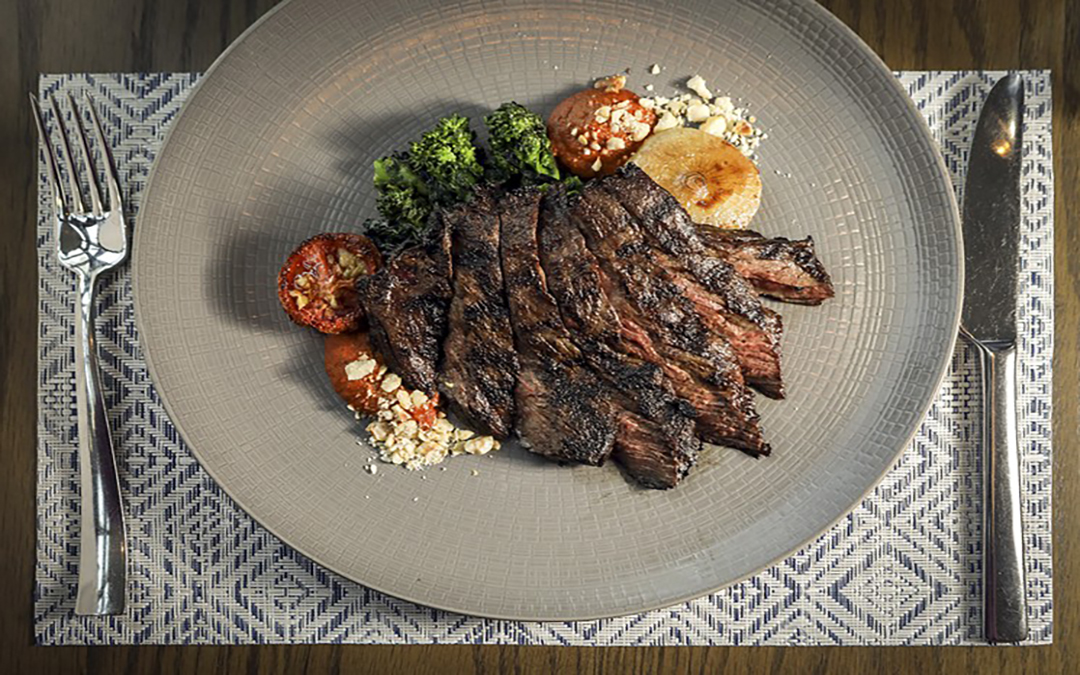 The year is only half over, but Miami’s restaurant scene has already grown by leaps and bites. So far in 2018, the area has gained scores of highly anticipated openings with inventive concepts.

Many establishments — among them Planta in South Beach, Boulud Sud in downtown Miami, and Hiden in Wynwood — have shown an ability to adapt to a new, younger, and more energetic clientele, one that strays from tablecloths and gravitates toward approachable and experience-based dining.

Planta. Off South Pointe Drive in South Beach, Planta offers delicious food and a chance to rub shoulders with stars. Brought to Miami from Toronto by nightlife veteran David Grutman, the place is entirely vegan, preparing innovative renditions of meaty cheeseburgers, fresh fish, and fried tater tots without a trace of animal product. For instance, ceviche ($15.25) is made with raw coconut meat that re-creates the texture of seafood. Then there’s the meat lover’s pizza ($19.25), topped with mozzarella made from cashews, bacon from mushrooms, and sausage composed of farro — a dried wheat product. Planta’s burger ($19.95) includes a veggie patty made of black beans, mashed lentils, and beetroot, with a gooey cheese prepared from carrot and potato. 850 Commerce St., Miami Beach; 305-397-8513; plantarestaurants.com.

Malibu Farm. Inside the Nobu Eden Roc Hotel, this California-cool restaurant is reminiscent of the Pacific Coast town for which it’s named — call it upscale beach-shack style. The menu offers cauliflower-crust pizza, chicken-ricotta burgers, and cucumber-infused vodka cocktails — not exactly what you’d expect at a swank, Nobu-owned hotel at one of Miami Beach’s most historic properties. Created by Los Angeles-based private-chef-turned-restaurateur Helene Henderson, Malibu Farm celebrates locally sourced items and ingredient-rich plates. Right now, Henderson receives bread from Wynwood’s Zak the Baker, meat from Larry Kline in Deerfield Beach, and fruits and vegetables from Produce Kingdom in downtown Miami. Must-order items include a chicken and ricotta burger, hugged by a brioche bun and topped with bacon, tomato, red onion, and a spicy aioli ($17), and a grilled chocolate cake, which calls for throwing a cooled slice on a sizzling grill ($12). 4525 Collins Ave., Miami Beach; 305-674-5579; malibufarmmiamibeach.com.

Dasher & Crank. Inside a light-pink shop in Wynwood, an Electro Freeze machine rumbles, and a yellowish cream made with vanilla bean, passionfruit, and ají amarillo erupts from the spout. Nearby, stored in a cooler set to 5 degrees Fahrenheit, are other creative ice-cream flavors, such as raspberry-wasabi, salted caramel and black licorice, and mint made black with activated charcoal. Here, the simple milk, sugar, and egg recipe is dressed up with bacon, candied hemp seeds, and miso honey. At any given time, the sleek store, located on Wynwood’s main drag, offers 18 unique flavors ($5 and up), including Salty Beach, a creamy blend made with coconut, sea salt, and graham cracker crumbs. Then there’s Fat Elvis, with peanut butter, banana, and Miami Smokers bacon, and Mary Jane Brownie, a mix of brownie chunks, molasses, peanut butter, and candied hemp seeds. 2211 NW Second Ave., Miami; dasherandcrank.com.

Boulud Sud. The latest Miami venture for Daniel Boulud, the James Beard Award-winning French chef and restaurateur, Boulud Sud takes the place of DB Bistro Moderne, his former restaurant in the same space. Here, he serves a modern interpretation of his cuisine in a reenergized and decidedly more glamorous atmosphere. It’s his way of adapting to a more casual dining culture without compromising quality. Begin a meal with a mezze platter filled with two lightly fried herb falafel and a handful of crisp crackers ready to plunge into a spicy Moroccan hummus and an eggplant baba ghanouj ($15). Then opt for the chicken tagine, showered in a blend of North African spices, from coriander to cardamom ($28), followed by a warm basket of madeleines for dessert ($8). JW Marriott Marquis, 255 Biscayne Blvd. Way, Miami; 305-421-8800; bouludsud.com/miami.

222 Taco. Anna Robbins opened the eatery North Bay Village needed. This pink-and-teal joint offers tacos in the categories “Land,” “Sea,” and “Jardin” ($3 to $4 each). Though meat abounds here, veggie offerings are guilt-free standouts that offer all the acid, smoke, and spice of pork or beef. The cauliflower al pastor is particularly pleasing with sweet and sour flavors. The restaurant also serves breakfast all day with a Mexican twist, so you can have a plate of chilaquiles ($11) any time of the day or night. Wash it all down with some of Robbins’ curated rare tequilas and mezcals to keep the fiesta going until well past midnight.1624 79th St. Cswy.,North Bay Village; 833-222-8226; 222ta.co.

La Centrale. Eating here is a whole lot cheaper than booking a flight to Italy. Though this tri-level food hall is located in the heart of Brickell, it has the soul of Rome. On the first floor, experience a Neapolitan pizza, its molten cheese still bubbling from the oven ($15 to $22). One level up, try an Aperol spritz at theapéritif bar. Then head to Pesce, where you can channel an evening in Amalfi over a plate of chittara with sea urchin and lemon ($22). Venture to the third-floor “wine cellar” for a wide selection of Italian vintages by the glass and an even a great variety of bottles to take home.Brickell City Centre, 601 S. Miami Ave.,Miami; 305-720-2401; lacentralemiami.com.

Night Owl Cookie Co. In 2017, Night Owl churned out more than 750,000 cookies, averaging about 2,000 per day and ringing up more than $1.5 million in sales. Then, this past June, owner Andrew Gonzalez expanded into a larger, 2,000-square-foot space on SW Eighth Street, potentially breaking the record for the largest cookie shop in the nation. (Guinness World Records will send Gonzalez a certificate in the next few months, he says.) In Night Owl, Gonzalez has built a multimillion-dollar business by selling $2 doughnut-size cookies in dozens of flavors. Most nights, lines of eager customers hungry for Ave Marias — made with guava dough, white chocolate chips, and cream cheese frosting — swirl around his Calle Ocho storefront. Other popular cookie orders are s’mores, Cinnamon Toast Crunch, and the Dirty Diana, in which chocolate dough is stuffed with Nutella. In 2019, denizens of central Dade should be able to skip the drive out west — Gonzalez plans to open a Night Owl location in Wynwood. 10534 SW Eighth St., Miami; nightowlcookieco.com.

Hiden. Toward the rear of Wynwood’s the Taco Stand, a popular Mexican minichain from California, a mysterious omakase restaurant is disguised in plain sight. Here, a $150 reservation brings 16 courses of fish flown overnight from Japan. The two-hour experience centers on executive chef Tadashi Shiraishi, who stands behind an intimate, eight-seat bar, ready to perform an intricate culinary dance in which he and his assistant chef prepare, cook, and serve 128 plates per seating. The menu is decided each day but typically includes two cold appetizers, such as a sashimi selection or tuna tasting; a warm soup; eight to ten sushi items; a hot entrée such as Wagyu steak; and a light dessert. Reservations can be made only through Tock, an upscale version of OpenTable. A few hours before arrival, diners receive entry codes, directions, and instructions. 313 NE 25th St., Miami; hidenmiami.com.

St. Roch Market. With 10,000 square feet of food choices, St. Roch is an omnivore’s dream come true. The Miami namesake of a famed New Orleans food hall, St. Roch is best experienced with a group of gluttonous friends — each bringing a different item to the communal table. Start at Elysian for a half-dozen grilled oysters ($18), oozing with buttery goodness. Next up is a literal tower of hummus at Jaffa; a sharable portion is served with tehina, pickles, Israeli salad, and pita for only $10. Follow with 25-hour-brined fried chicken served on a cheddar-chive waffle at Coop ($18) before getting a chocolate chip cookie so creamy you’ll wonder how on Earth it could be vegan. Wash it all down with the bestSazerac you’ll find outside NOLA at the bar the Mayhaw. 140 NE 39th St.,Miami; 786-542-8977; miami.strochmarket.com.

Azabu Miami Beach. Just up the block from Nikki Beach, Azabu is based on a sister concept in New York City’s Tribeca neighborhood that earned a Michelin star for serving traditional and somewhat affordable omakase in an underground speakeasy. Miami Beach’s Azabu defies the usual limitations on classic Japanese cuisine by offering large portions of Tokyo comfort food at reasonable prices with exceptional service. A visit must include orders of the tori kara-age, Japanese-style boneless fried chicken ($14); the yakitoro momo, in which grilled chicken thighs are placed on a skewer and doused in a sweet soy ($12); and spicy tuna and beef tataki rolls. Or try a platter of sashimi and nigiri tuna, salmon, toro, and amberjack ($6 and up). 161 Ocean Dr., Miami Beach; 786-276-0520; azabuglobal.com